I find it hard to believe that I’ve been taking classes at FSI (foreign service institute…this is my federal employment coming through – acronyms!!) since February…didn’t I just get here?  The unpacked box of clothes in my bedroom now seems pretty pathetic. My new pack-out for Sarajevo is less than a month away, I guess I’ll just leave it packed and save the new movers some effort.

Right now we are in a 2-week class where we recap the things we learned throughout our previous lessons, and it’s become painfully obvious that my memory isn’t what it used to be.  The instructor hands me a scenario, I look it over, and then am forced to think back a few months ago, throughout my hundreds of hours of instruction, to pick out one single lesson, to recall that ONE button that was on that ONE tab of that ONE application that I used briefly, oh and what was that password again?  I feel like there was a hidden field if I expand this….oh hell I just printed that invoice, better shred that.  What’s the radio protocol again, am I ACTUALLY supposed to say niner or is that just what they say on Tommy Boy?  Ah, I need to change that group policy…WAIT, did I set that for the entire network or just my post?  Was I supposed to do an incremental or full backup there?  Did I need to print two copies of that inventory, and do I sign both or just the one?  What was that combination I learned two months ago?  And on and on it goes.

So yes, it’s quite a bit to remember, and I’ve had a TON of information crammed into my brain in a relatively short amount of time, but I’ve got to say it’s been a pretty great experience overall.  Plenty of hands-on lab assignments, lots of field trips to meet with the respective experts in our field, weekly exams to keep us on track, and a plethora of study materials to take with me to post.  I have to give props to FSI – they’ve done a pretty amazing job of taking 23 IT-folks from VERY different backgrounds, and getting all of us on the same page.

So between my various classes I managed to fit in a few more weekends of family shenanigans, and for that I am so thankful.  A few weekends ago, baby brother Nate graduated from Purdue as a DOCTOR of Pharmacy.  A doctor, for crying out loud.  I flew into Indy, we got celebratory Thai from Thai Spice in Indy (4.5 stars on Yelp, that’s no joke!) and said goodbye to Nate’s lovely apartment (but not so lovely water pressure.)  Nate will be renting my condo in STL so we helped him move…another third floor walkup, another move, just your average day in the Cain household.

The graduation ceremony was lovely and about 2.5 hours too long, so long in fact that most of the MBA students left before the thing was even over.  RUDE.  I was surrounded by proud parents and siblings and girlfriends/boyfriends and grandparents, and one stupidly racist/terrible/awful man behind me who threw a FIT when the announcer (who had to say about 1000 people’s names in the span of a couple hours) messed up his son’s last name.  Ok, I get it, you paid thousands upon thousands of dollars for your kid’s education, I understand that you’d be disappointed in hearing your last name botched, fair enough.  What was NOT OK was his rant that followed, loudly complaining about all the FOREIGN names all got pronounced correctly, obviously they cared more about those FOREIGNER NAMES than the name of his AMERICAN son ROBERT…..GO ROBERT!!!! YEAH ROBERT!!  He yelled these evil words from the balcony, minutes after his son had already crossed the stage and taken his seat.  That fact that his son’s name was botched obviously warranted ruining everyone’s diploma acceptance too.  Happily the jerk face got bored and left early, I did not miss him.

So ever since I got this gig and knew I’d be living in the DC area for a while, my dad has mentioned he was going to come visit and do nothing but hit up museums the whole time.  Happily at the end of May, he got his wish.  Mom and Dad drove over from Philo and got to enjoy the Memorial Day weekend in Arlington with me.  We really made the most of the trip: Air and Space Museum (x2!), American History Museum, National Archives, Capitol Building, Library of Congress, Arlington Cemetery, and more memorials/statues than you could imagine.  Mom and I were so excited!!! 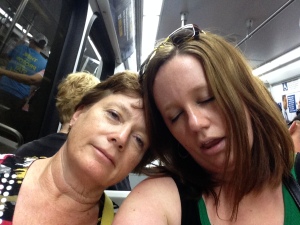 My whole family went on a trip to DC back when I was in either junior high, and let me tell you, that trip was wasted on me.  At that point in my life I was interested in shopping and beaches and boys, I could not have cared any less about war memorials or airplanes.   Well on that trip, we as a group gave my dad ONE HOUR to spend in the Air and Space museum, and that was it.  We would wait for him at the snack bar with our french fries, and after that we were going to hit up Old Navy.  He hung his head, did the best he could with his one hour of history, and then left.  And he never forgave me.

So on this trip, I was determined to make it up to him.  As penance, I took him to the Udvar-Hazy Center, an Air and Space Museum annex out at Dulles Airport that was basically the greatest thing I ever could have done.  We spent an entire day roaming around hangers full of iconic planes: 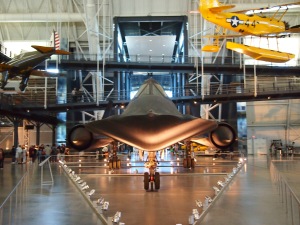 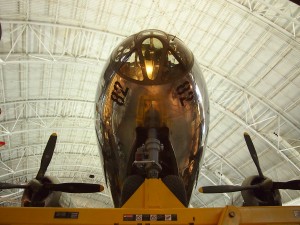 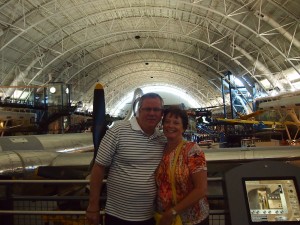 Dad had a great day!

One thing we neglected to do was take a single pic with Kashmir, the SWIC Mascot who is supposed to be traveling around with me in DC.  So this one should make up for it.

Not only was I glad that my parents visited so that I could spend time with them, it also served as a great excuse for me to actually get out and see DC in all of its splendor.  We decided to go to Arlington National Cemetery to pay our respects to those who gave their life for our country, and wouldn’t you know it, we stumbled into a memorial service with a pretty high profile speaker – President Obama.  He laid a wreath at the Tomb of the Unknown Soldier and gave a very nice speech recognizing our Armed Forces. 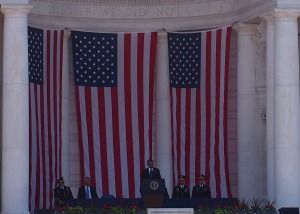 After a full week of museums, memorials, national parks, it was hard to pick my favorite thing we did.  I really enjoyed seeing the monuments at night (with a ton of visitors laying flowers at each memorial), the ceremony at Arlington was touching and a beautiful tribute to the fallen, I loved seeing Dad so excited to explore iconic airplanes used to change the course of human history, I loved eating breakfast with my parents before heading off to work for the day, enjoyed taking them to some of my favorite restaurants in the area, and was basically thrilled to spend time with the family again!  I leave you with this parting shot, of a particularly interesting exhibit at the American History Museum. 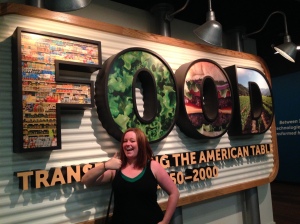 I loved this exhibit…because of course I did