So I had a wonderful time in Philly with big sister Melanie, but sadly she had to go home to her husband and children and job and left me all alone.  But no worries, baby sister Shannon and friend Ashley were coming to visit next!  Alone no longer!

Shannon and Ashley flew into Dulles while I was at work and I met them in Arlington to celebrate their arrival.  We opted to meet some of my coworkers at Rock Bottom Brewery, where we made the delicious discovery that draft beers were $1.50 on Wednesday nights.  WHAT?  So we had a lovely dinner, the girls got to meet some of my colleagues, and we had a great time catching up over many glasses of Fire Chief Ale.

I went to work the next morning (why must I always go to work?) while the ladies went out and explored DC, or as they called it, “The Capitol”.  (Hunger Games reference.)  They took about 8 billion selfies (quite the Snapchatters…I still don’t even really understand what Snapchat is?  Is it supposed to be two words?  Snap Chat or snapchat?)  in front of various national monuments, my favorites are as follows: 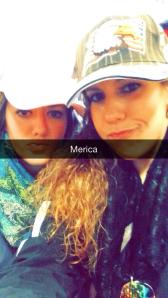 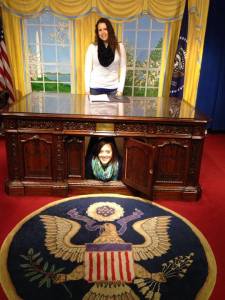 They had an awesome, jam-packed day and walked all over the district, so that night we stayed in (MY FAVORITE, NO I’M NOT KIDDING) and watched movies and got Italian food delivered straight to the room.

I talk a big game, pretending I like living in big cities because of the culture, the mass transit, the mass of people all around.  I’ll be honest with you, the best perk is delivery food.  Not even slightly kidding.

So, anyway.  The next day the girls discovered Georgetown while again, I went to work.  They loooooved the area, did some eating, shopping, and people watching, and I picked out a nice 7 Million Dollar penthouse for Shannon to live in when she becomes a rich and famous doctor.

That night we decided to go big since we stayed in the night before, and we were introduced to the deliciousness that is Ray’s the Steaks (and I’m not just talking about the clever name.)  Food was incredible, steaks come with family style creamed spinach and mashed potatoes (unlimited!) and we also split one order of a cast iron mac and cheese that would make you weep.  Shannon selected a bottle of red wine for the table, and my status of “not a wine person” is still accurate.

The next morning we braced ourselves for the Shamrock Crawl, a HUGE barcrawl throughout Arlington that was within walking distance of my apt.  We dressed in our best Irish gear and followed the masses to the bars nearby to meet our friend Paul.  We hopped to a few bars, but ultimately the lines got SO long that we decided to settle on one bar/grill, and just hung there for the day so we wouldn’t spend half of the day waiting in line to get in.  (Everything was 1 in 1 out by about 4:00pm.)  Check out the line outside Rooftop: 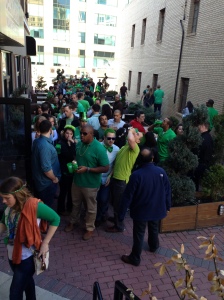 We made some friends with some ladies who had snagged the best booth in the bar, and we sat around with them, people watched, enjoyed $2 Yuenglings and had a great time, despite the lack of Irish music being played.  As the hours passed by, we headed to Adams Morgan for some karaoke at Muzette with some of my coworkers.  I had NEVER done karaoke like this before, we literally were ushered into our own private room and we spent the next two hours passing around the mic, picking any song that sounded fun, and had many sing-alongs as a group.  I’ve gotta say I think I prefer the traditional karaoke bars, but if I feel like giving a private concert for $80 an hour I know where to spend my $$.  By this point in the night we were spent, and took a cab home to sleep and sleep and sleep. 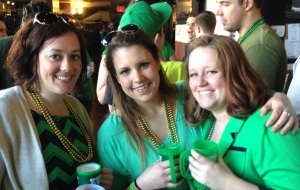 Woke up the next morning, sad that Shannon and Ashley had to head home that day.  After the bar crawl, we found ourselves craving less than healthy food options, so we strolled down the street to Wilson’s Tavern to eat some lunch.  We decided to just split some appetizers, and (no joke) this was our menu:

The girls flew home that afternoon, and I was so sad to see them go, ladies thank you for coming to see me and helping me explore the area!  And thus ended my streak of non-stop visitors.  Sad for my heart, but good for my health, as I need to stop going out to eat.  Maybe I can try to eat some plants and other things that come from the earth.  Seems like a solid plan.