So I moved to the DC area in early Feb, and it seems that I’m spending every waking moment in class, doing homework, reading, doing post research, etc.  But I managed to fit in a little sight-seeing around the East Coast in my free time, my mom and Nate visited and we explored a bit and ate some awesome things.  That really why I travel, so I can eat things.

So we found ourselves with a 60 degree day, and decided to spend it at Mt Vernon, George Washington’s home.  And wouldn’t you know it, we showed up on “The General’s” 282nd Birthday.

The back of the estate

The trip was actually pretty insightful, for instance I had no idea that Martha was a widow when she met Mr. Washington, and that George never had any legitimate children of his own.  The main house was broken up into several smaller rooms, my favorite was easily the casual dining room, with its bright green walls and black and white checkered floor.  Mark my words, if I ever find myself owning some kind of grand estate, I will be decorating one room in this fashion.  (Sorry, no photos, they weren’t allowed.)

Some other highlights for the trip were the “Dung Repository” (compost pile) and the “Necessary” (outhouse.)   Again, my apologies for the lack of photos, but did you really need to see those?  Use your imagination.

We took the rest of the afternoon and headed briefly to Arlington National Cemetery.  I tell you, this place gets me every time.  The sheer number of headstones, seemingly going on for miles and miles.  A completely humbling and stunning experience, if you’ve never been, make sure you add this to your next trip to the area.

JFK and Jackie Kennedy are buried at Arlington as well, marked by an “Eternal Flame,” similar to the one marking the French Unknown Soldier in Paris.  The site was chosen based on a statement that JFK once made, stating that the view of DC was so magnificent that he “could stay forever.”  Below is a photo of the grave (with stones from Cape Cod), after that is the view of the District from the grave site.  Pretty fitting, if you ask me. 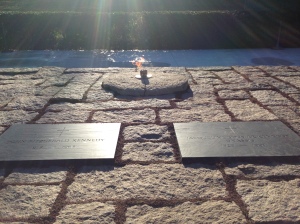 We made it just in time for the final public Changing of the Guard, in front of the Tomb of the Unknown Soldier.  If you want to learn more about these guys, this link has some great info.  https://tombguard.org/society/faq/  There is a ton of misinformation floating around about the Honor Guard (rumors that they can’t swear ever again, that they live under the tomb, etc), the guard does an amazing job maintaining the dignity of such a position.

Changing of the Guard

The next day we headed to the basilica, with the very long title “Basilica of the National Shrine of the Immaculate Conception.”  Apparently this is the largest Catholic Church in North America, and while the tile work was certainly gorgeous, I’m sorry but I gotta give the edge to the St. Louis basilica here.  Though there was one section that I really loved, one of the little side chapels.  We lit a candle for Uncle Dean after mass and took in all of the amazing details of the church.

** Side note: as we were leaving I saw Newt Gingrich leaving his SUV and walking into the church.  Now I don’t know if it’s just me, but I tend to think older political types look preeeeeeetty similar so I asked my mother to confirm, she decided indeed it was Newt.  We were vindicated when some tourists asked for a photo with him a few moments later.  Oh Newt.  What a great name.

We then headed for Annapolis, Maryland, to enjoy another gorgeous day, and to maybe eat some crab and see some boats.  We headed to Galway Bay Irish Pub, partially because they had good reviews but mostly because I like things that remind me of my trip to Galway, Ireland.  We enjoyed some Guinness and some seafood.  As it turns out, I really don’t care for oysters, even when deep fried.  Boogers, they look like boogers.  However, the scallops were fab. 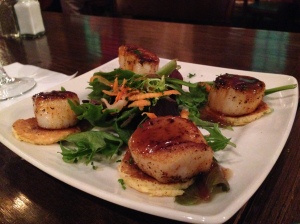 We walked around the area, not sure if it’s called Old Town or Downtown or Cute Red Brick Street area, but we picked up some locally-made pottery, and strolled along the pier to look at all the sailboats.  Every time I see a large group of sailboats, I will forever refer to it as a Regatta Gala. 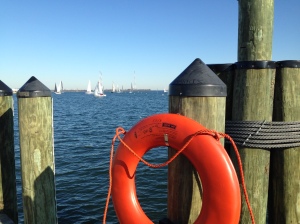 Rachel: What kind of a regatta gala starts at night?
Monica: The fake kind.

I have kind of a deep-seated anger about boat shoes being worn in the Midwest, but as it turns out Nate was wearing them this particular day, and I complimented him on his appropriate choice of footwear.  See, I’m not a hater, I just think that boat shoes belong on or around boats.  Not cornfields.

Sadly I had to work the next day, so I didn’t get to join mom and Nate on their museum visits, but they really enjoyed the Natural History Museum and the Newseum, so I’ve got those on my list.  We headed out to the District one night, and decided to hit up Billy Martin’s Tavern, a Georgetown institution made famous when JFK proposed to Jackie in one of their booths.  (Side note, our waiter said that people reserve that particular booth all the time to propose to their girlfriends, in his words “It still works!”)  I enjoyed a GREAT porkchop with swiss chard, sauteed apples and potatoes.  Worth the hefty price tag.  There was also a Truman booth, a Madelaine Albright booth, etc.

On the way back to my apartment, we swung by Georgetown Cupcake for a little sweet treat.  This spot has a special place in my heart, when I came to DC for my interview my family had sent a dozen up to my hotel room so they’d be waiting for me, with little green four-leaf clovers on them.  So it seemed only fitting that I get a cupcake the night before Flag Day!  I enjoyed a Chocolate Lava Cupcake for breakfast the following morning and then got my Sarajevo flag later that day.  Coincidence?  Doubt it.

My family headed home the next day to make it back for my Uncle’s services and I was so sad to see them go, and also so sad not to be going myself.  Family, I’ll be home for Easter so I hope to see you all then!

Happily I have my big sister Melanie visiting me this weekend (g-g-g-going to PHILLY!!) and later next week, my little sister Shannon and her friend Ashley will visit as well (WOO!!)  I love my family and the fact that they don’t mind trekking across the country to come see me.

So, enough procrastination, back to dumb things like laundry and paying bills.  Thanks for reading!

One thought on “In and around DC”